Language beyond the linguistic turn: Taking warfare at its word(s) 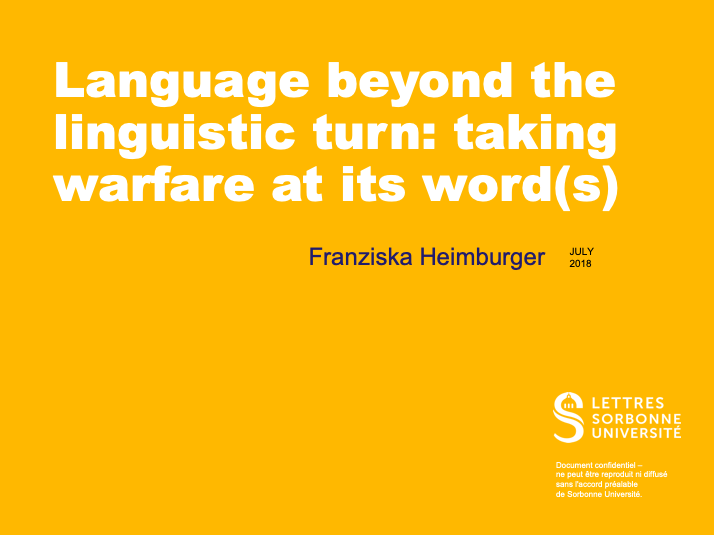 With a few notable exceptions, military history as a whole has not engaged significantly with the linguistic turn. While whole conferences could be held on the reasons for that, I would instead like to take a slightly different approach in order to bring language back into the military discussion. Rather than looking at narratives of warfare, I would like to take us right back to the words of past warfare. When R.J.W. Evans said in his inaugural lecture for the Regius professorship of History at Oxford (1988) that “language is a constraint upon the historian […]; but it is also a vital and still unexploited field of study.“ he was advocating for historians to see language use in the past as a source, as an inroad into topics which have resisted historical analysis. I argue that military history as a whole – as a field which is intrinsically about encounters with the foreign and different – can benefit greatly from a close investigation of words used and communication engaged. This is particularly true of coalition warfare as a subject for study in military history which has suffered in the past from intrinsic structural difficulties. National biases in training, source access and funding make balance difficult while comparative history in its narrower sense of comparing two historical entities runs the risk of missing the crucial interaction between the two (or more) partners. Using my research into language in the Allied coalition on the Western Front during the First World War as a starting point and supplementing this with material from my new project on coalition warfare from the Crimean war onwards, I will show how the language of the past provides us both with macro-level answers to questions of success and failure in military planning and also with insight on social and cultural contact and evolution brought on by warfare.