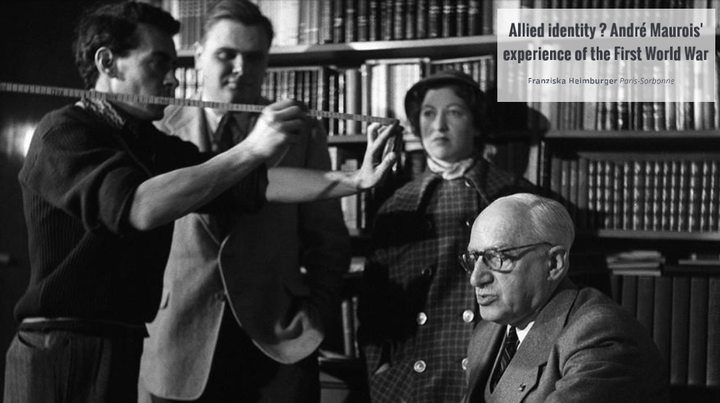 Works especially by Christophe Prochasson (1993; 1996; 2004) and Martha Hanna (1996), but also more recently and more peripherally by Nicolas Beaupré (2006) and Charles Ridel (Ridel 2008) have widened and deepened our understanding of what it meant to be a French intellectual during the First World War and how their identities were shaped. André Maurois does not fit neatly into the established categories of shirker intellectuals who wrote about the war from Paris or combatant intellectuals who risked their lives in the front lines. As a military interpreter working for the British Army, he existed between these categories while encompassing aspects of all of them. Our wider research on these go-between figures enables us to examine closely this relatively little-studied aspect of Maurois' biography. Maurois' war experience left a multitude of traces reaching from the translation of Ian Hay’s novel The First Hundred Thousand (1915a; the translation was published as: 1915b) into French, the documents of the French military administration, his private correspondence, the fictionalised account of his experience published as Les silences du Colonel Bramble all the way to his memoirs written at the very end of his life. Using a range of analytical approaches, including methods from translation studies, eminently suited to this topic, we intend to reconstruct this particular experience of the War which was in a certain way foundational for Maurois' existence as an intellectual and later as an expert on all things British in France. He might well have continued after the war in the Normandy textile industry under the name of Emile Herzog, had it not been for the literary success of his fictionalised account of the War and the shadow and the memory of the War thus continue to weigh on him throughout his life.